What would it be like to be  imprisoned in a country you once called home due to your race?

“But we didn’t believe it. We said no, no. Not this country. This country is supposed to be the symbol of democracy and humanitarian concern and we didn’t think it could happen.”
- Yuri Nakahara Kochiyama 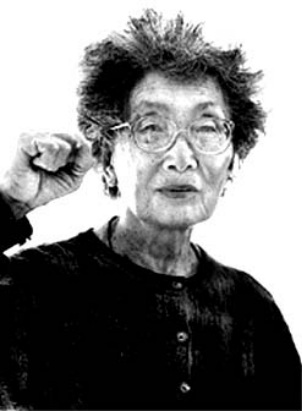 Yuri Nakahara Kochiyama, an activist for equality among all races.
Japanese Americans, like Yuri Nakahara Kochiyama, were interned based on their race, causing their whole lives to be uprooted. Yuri was twenty years old when she and her family were uprooted from their life in San Pedro, California.  Yuri's father was targeted by the Federal Bureau of Investigation (FBI) because he was a prominent member of the Japanese community. He was taken in from his home and thrown in jail without an explanation. After much pleading he was moved to a hospital because he was weak due to the surgery he had days before. He returned to the house after intensive interrogations, where he died hours later. A month after this devastation Yuri and her mother were forced to leave their home and everything that they could not carry on their backs and travel to an internment camp. Her ordeal in the internment camps turned her into a political activist and an involved member in her community. Experiencing internment caused Yuri to realize that the Japanese were not the only race fighting against persecution, thus she became and activist.